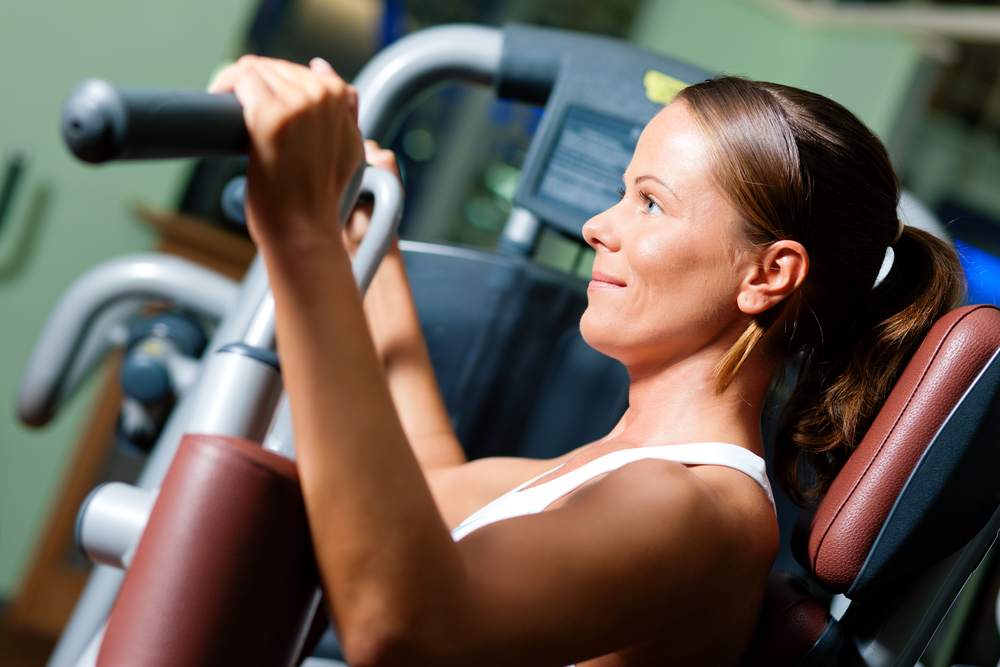 Cardiac muscle resides only in the heart. It shares several common features with skeletal muscle as both appear striated (striped) under low-magnification microscopic examination and both shorten (contract) in a similar manner. Smooth muscle lacks a striated appearance but shares cardiac muscle’s characteristic of nonconscious regulation under autonomic nervous system control. Skeletal muscle operates under voluntary control, as in curling a 25-lb barbell.

Individuals can easily control the velocity of movement in a barbell curl, the range of motion during the lifting movement, and the number of repetitions completed. In golf, the player controls all aspects of the coordinated and hopefully perfectly timed movements of the arms, legs, and torso during the backswing and downswing. A different situation exists for both cardiac and smooth muscle tissue because activity of these tissues occurs involuntarily, although mediation from central centers can exert some influence. This means a general absence of conscious control as to how fast the heart beats, or how fast food moves through the digestive system, or how the miles of blood vessels contract and expand throughout the day.

The figure below illustrates a cross section of skeletal muscle structures and arrangement of connective tissue wrappings, including the thousands of cylindrical wells called fibers.

Each of the body’s approximately 600-plus skeletal muscles contain various wrappings of fibrous connective tissue. These long, slender, multinucleated fibers lie parallel to each other, with the force of action directed along the fiber’s long axis. Their number probably remains largely fixed by the second trimester of fetal development. Individual fiber length varies from a few millimeters in the eye muscles to nearly 30 cm in the large antigravity leg muscles (with width reaching 0.15 mm).

The tissues of the tendon intermesh with the collagenous fibers within bone. This forms a powerful link between muscle and bone that remains inseparable except during severe stress when the tendon can sever or literally pull away from the bone. When the tendon attaches to the end of a long bone, the bone adapts by enlarging at that end to create a more stable union.

The force of muscle action transmits directly from the connective tissue harness to the tendons, which then pull on the bone at the point of attachment. The forces exerted on the tendinous attachments under muscular exertion range from 20 to 50 N (197 to 492 kg) per cm2 of cross-sectional area—forces often larger than the muscle fibers themselves can tolerate.

The muscle’s origin refers to the location where the tendon joins a relatively stable skeletal part, generally the proximal or fixed end of the lever system or that nearest the body’s midline; the point of distal muscle attachment to the moving bone represents the insertion.

Beneath the endomysium and surrounding each muscle fiber lies the sarcolemma, a thin, elastic membrane that encloses the fiber’s cellular contents. It contains a plasma membrane (plasmalemma) and a basement membrane. Between the basement and plasma membranes lie myogenic stem cells known as satellite cells, these normally quiescent myoblasts function in regenerative cellular growth provide possible adaptations to exercise training and recovery from injury.

Water constitutes approximately 75% of skeletal muscle mass while protein composes 20%. The remaining 5% contains salts and other substances, including high-energy phosphates; urea; lactate; the minerals calcium, magnesium, and phosphorus; various enzymes; sodium, potassium, and chloride ions; and amino acids, fats, and carbohydrates. The most abundant muscle proteins include titin, the largest protein in the body consisting of 27,000 amino acids (accounts for about 10% of muscle mass), myosin (approximately 60% of muscle protein), actin, and tropomyosin. Each 100 g of muscle tissue contains about 700 mg of the oxygen-binding, conjugated protein myoglobin.

Arteries and veins that lie parallel to individual muscle fibers provide a rich vascular supply. These vessels divide into numerous arterioles, capillaries, and venules to form a diffuse network in and around the endomysium. Extensive branching of blood vessels ensures each muscle fiber an adequate oxygenated blood supply from the arterial system and rapid removal of carbon dioxide in the venous circulation. During vigorous physical activity for an elite endurance athlete, the muscle’s oxygen uptake increases nearly 70 times to approximately 11 mL per 100 g per minute. The local vascular bed delivers large quantities of blood through active tissues to accommodate this oxygen requirement. Blood flow distribution fluctuates in rhythmic running, swimming, cycling, and other similar activities. Flow decreases during the muscle’s contraction phase and increases during relaxation to provide an auxiliary “milking action” that moves blood through the muscles and propels it via the venous system back to the heart. Between 200 and 500 capillaries deliver blood to each square millimeter of active muscle cross section, with up to four capillaries directly contacting each fiber. In endurance athletes, five to seven capillaries surround each fiber; this positive adaptation ensures greater local blood flow and adequate tissue oxygenation when needed.