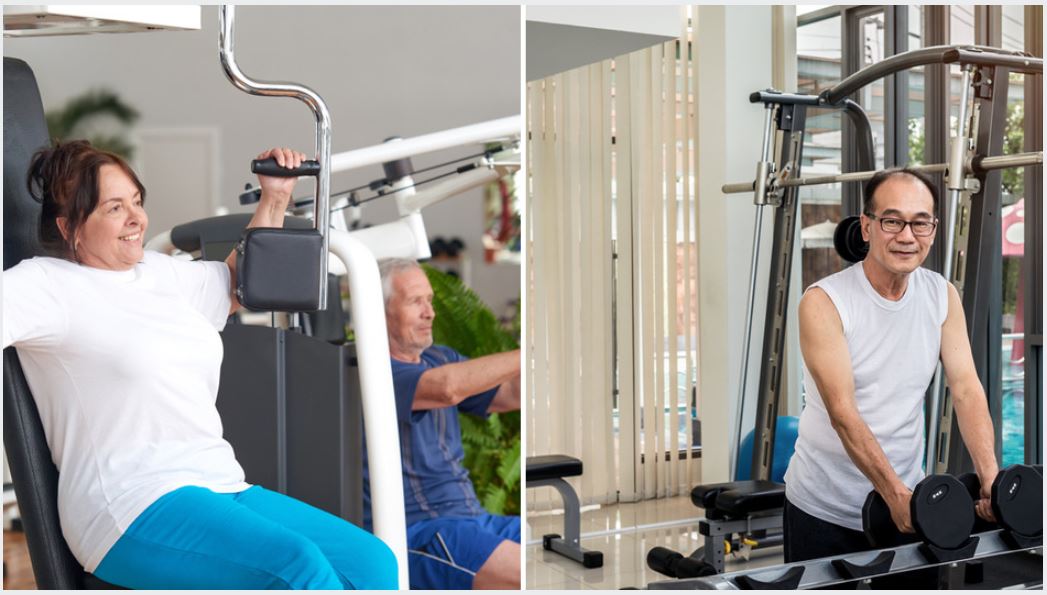 The decrease of muscle mass (sarcopenia), strength and muscular power (dynapenia) are physiological processes of aging, in particular with the onset of the sixth decade. There is ample evidence that resistance training (RT) is beneﬁcial in counteracting the age-related muscle and nerve degenerating processes. RT consists of muscle-strengthening exercises typically performed with machines or free weights (e.g. dumbbells, barbells). These exercises have been conﬁrmed to have positive eﬀects in numerous factors in older adults including markedly increased muscle mass, strength, and power, improved body composition, bone mineral density, mobility and balance, decreased risk of falls, increased cognitive functions and an overall improved quality of life.

Although much is known about positive eﬀects of RT, designing the “optimal” RT program for older adults with or without motor and/or cognitive impairments remains diﬃcult due to the large number of organizational variables and mechano-biological factors involved, including whether there are differences between training with free weights (FWT) or training with machines (machine training- MT) in older adults.

The aims of this study were to compare the eﬀects of a high-intensity free weights to training with machines during 26 weeks in high-functioning older adults. Although the basic movements during FWT vs. MT are similar for many exercises, these training modalities have unique characteristics that can cause diﬀerent adaptation performances. For example, the individual does not have to balance the weight himself during MT and can therefore use higher weights. In contrast, FWT is attributed to muscle activation close to natural movement, a higher range of motion, and better physiological responses. Women also seem to achieve better adaptation performance in MT compared to FWT.

In order to test training-speciﬁc adaptation processes, the testing was speciﬁcally adapted to the training method of the respective group, i.e. changes in the force parameters in the FWT group were tested with free weights, while the MT group was tested on machines accordingly.

Two hypotheses were tested. The first was that both methods would lead to increases in maximal strength production in older men and women. The second hypothesis was that FWT would result in a greater increase in muscular strength compared to training on machines.

Participants included both sexes with a range of socio-economic status and varying physical activity levels. Inclusion criteria were age between 60 and 90 years, living independently, and not having lifted weights in the past 6 months. All training sessions were performed at a gym supervised by certiﬁed ﬁtness. During the intervention period, training was conducted twice per week (at least 48 h between sessions) for 6 months (26 weeks). Each training session lasted for ~75 to 90 min, and consisted of a 5 to 10 minute warm-up, 5 exercises for diﬀerent muscle groups (2 warm-up sets of 15–20 repetitions; 3 sets of 10–12 repetitions maximum [10-RM]) using either machines or free weights, and 20 min endurance training using cycle ergometer, cross-trainer, or rowing ergometer. Two trainers supervised all subjects so that all program characteristics were strictly enforced. To ensure consistent performances, all exercises were performed with a partner. The MT group performed exercises involving the quadriceps femoris (leg press), the pectoralis major (chest press), the latissimus dorsi (seated rowing), the triceps brachii (triceps cable extension), and the biceps brachii (biceps cable curls), while the FWT group trained the same muscle groups with barbells using squats, bench press, bent-over rowing, lying triceps press, and biceps curls.

Participants were instructed to alternate the concentric phase with the eccentric phase by e.g., lowering the weight during the bench press exercise over the course of 2 s, and then returning it to the starting position over the course of another 2 s. The order of exercises was not ﬁxed and dependent upon preference and availability of equipment in the gym. Rest between exercises lasted for ~2 min. Attempts were made to progressively increase the loads lifted each week within the conﬁnes of maintaining the target repletion range (10-RM). Initial loads for each exercise were based on 70 to 80% of subjects 10-RM (depending on the task), as determined during initial testing, consistent with recognized guidelines established by the National Strength and Conditioning.

Testing was conducted at baseline, after 10 and 26 weeks, and after a 6-weeks detraining phase. Baseline testing with the 10-RM was undertaken. Initial loads for the 10-RM test were estimated based on researcher experience. If the participant reached 12 repetitions, and reported being able to do more, then the participant was given a 5-min rest period followed by a subsequent 10-RM test wherein the resistance was increased by approximately 20%. This process was repeated until the participant could perform no more than ten consecutive repetitions. These estimations were used to calculate the RT intensity for the remainder of the program, with the target of training being 70–80% of 1- RM. Thirty-two subjects completed the training and included in all analyses.

Handgrip strength, using the squeezing muscles of the dominant hand, was measured as an index of static grip strength needed for such activities as rising from a chair or bathtub; this measurement also determined the initial dumbbell weight for each resident.

The results of the study demonstrated a signiﬁcant increase in overall dynamic strength in both groups (see figure below). Strength Increases varied between 28 to 75% (MT) and 44 to 111% (FWT) over the 26 weeks of training. In comparison to other studies, the rate of increase in this study was much higher than usually reported for this age group. A possible explanation for these diﬀerences could be the length of the intervention, 25 weeks is longer than most studies employ.

Moreover, triceps-strength improved signiﬁcantly more with FWT compared to MT. This improvement seemed also be helpful for activities of daily living, like getting up from a chair or stepping out of the bathtub.

Findings from this study suggest that: (1) dynamic strength gains from 6 months of resistance training in older individuals are sustainable (not entirely lost even after 6 weeks of detraining); (2) these eﬀects are speciﬁcally related to the exercises performed in the training program (free weights vs. machine); (3) adoption of maintenance-level moderate-intensity training signiﬁcantly attenuates the decline in dynamic strength of previously trained muscles; and finally, (4) high-intensity free weights training is feasible for high-functional older adults.